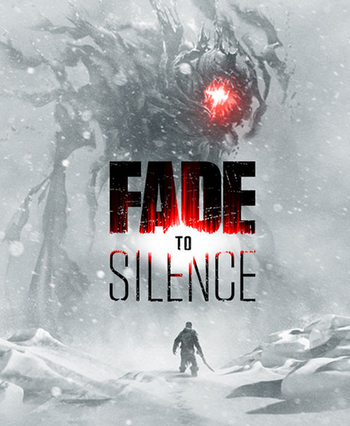 Fade to Silence is a self-described Survival-RPG, developed by Black Forest Games (the German makers of the Giana Sisters series and comprised of most of the former staff of the company that made Arcania: Gothic 4) and published by THQ Nordic on PC, Playstation 4 and Xbox One on April 30th, 2019. In essence, it's a Survival Sandbox game with Dark Souls-inspired combat, and is every bit as unforgiving as that sounds.

It is set in a ravaged world of Post Apocalyptic winter, where players take on the role of Ash, a man who had already died once, but was then revived by a mysterious Inner Voice in a ritual that leaves him with six more lives ("Flames of Hope"). You can gain additional ones through cleansing Blight nests, but losing all of them forces you to restart the game, with at most a few perks ("Permanent Blessings") being carried over.

Having been given a new chance at life, Ash attempts to not just make it through for himself and his daughter Alice, but also establish a refuge for others. The task is complicated by the presence of The Blight, whose corrupted monsters constantly seek to end the group. Moreover, they always know where you are, as they are led by the same Inner Voice that revived you, and now observes the proceedings through your body for its twisted amusement. Still, even they are vulnerable to the weather, and both you and them must fear the blizzard more than anything else.

Compare to Frozen State, which is also a Survival Sandbox set in a frozen post-apocalyptic world, and which also features both RPG Elements and Roguelike elements.

Tropes present in Fade to Silence: