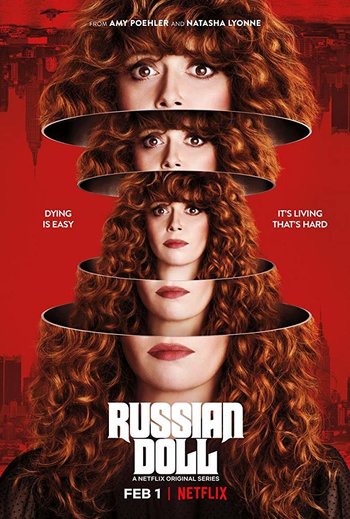 Nadia Vulvokov (Lyonne) is a video game programmer living in New York City who just turned 36. At the birthday party her friends threw for her, she decides to go home and sleep with Mike, a random guy she just met. After sleeping with him, she leaves, sees her cat Oatmeal on the other side of the street and goes to get him...and then gets hit by a car and dies.

If only she could figure out why this is happening.

A second season was greenlit pretty much immediately after the first season had aired, and filming was meant to begin in March 2020, but production was delayed for a whole year due to the filming restrictions imposed by the COVID-19 Pandemic in New York. The trailer for Season 2

Warning: The series contains a major twist at the end of episode 3 that makes it tricky to talk about the show beyond that point without giving the twist away. Therefore, the twist is unmarked here. Read on at your own peril!