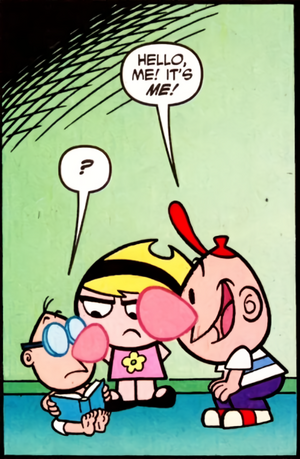 By some mechanism, be it Time Travel, Alternate Universe, Literal Split Personality, or Cloning Blues, there are now two or more Alternate Self editions of a character. Each copy seems unable to get over the fact that every other copy is him/her/them/itself and this shows up with pronoun confusion.

Generally Played for Laughs, as writing this trope is much harder than simply using third person. Related to Time-Travel Tense Trouble. Talking to Themself is a sister trope where different parts of a character with a Split Personality converse with each other, possibly leading to such confusion on the part of observers.

Compare My Future Self and Me. Also see One Steve Limit, which can result in similar problems when averted. may lead to a Alternative-Self Name-Change.