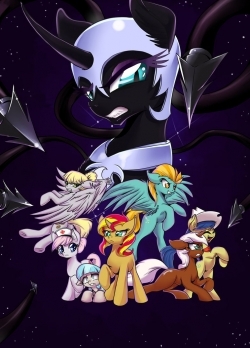 is an Alternate Universe series of fics of My Little Pony: Friendship Is Magic started by Evowizard25

The Shimmerverse is a world that is similar to canon in some respects, such as Celestia ruling Equestria for a thousand years after banishing her sister. However, the similarities are small. This Equestria has always been at war with someone. Celestia is the supreme goddess in the eyes of the Equestrians and they fight for her each and every day. Of course, Nightmare Moon is to return and now Sunset Shimmer, the adopted daughter of Celestia, has to save the world alongside six other mares.

The Shimmeverse is a Shared Universe and is always open to new stories from both the original creator and fans.

at Fimfiction.net, which also hosts a majority of the stories found in this Shared Universe. It's had a crossover with Whiteeyes' similarly conceived The Sunsetverse. The series also has a crossover with another series in The Multiverse, Tarbtano and Faith-Wolff's The Bridge called The Bridge: A Shimmer in the Dark

. It is considered canon and is set after Fanning Our Flames.

There is a third crossover, this time with A Pony Out of Place and written by its author. It is the first chapter of Shimmy Shorts

, which is otherwise a series of non-crossover Shimmerverse stories.

Not to be confused with the fan group of the same name.

A Shimmer in the Dark provides examples of: