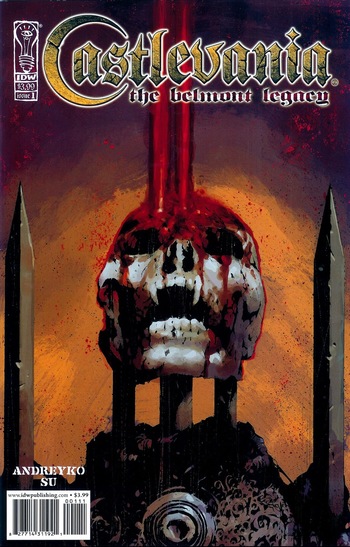 Castlevania: The Belmont Legacy is a licensed Castlevania comic book series by IDW Publishing in 2005. The 5-issue-long story is a loose adaptation of Castlevania: The Adventure from the Game Boy, and as such, it's considered a stand-alone continuity and non-canon with the rest of the original timeline.

It follows Christopher Belmont, a descendant of the famed vampire hunter family who is on the eve of marrying his betrothed Illyana. However, on the night of his wedding, the evil vampire Count Dracula is resurrected by a group of evil cultists after being dead for a hundred years. Being a sworn enemy of the Belmonts, he make his presence known by desecrating his family's cemetery and alerting everyone of his presence. Christopher is thrust into the fight against Dracula accompanied by his loyal butler Deimos and the Totoyan family, the safekeepers of the Belmont's heirloom whip, the Vampire Killer, and now he must fulfill his family's legacy once more.