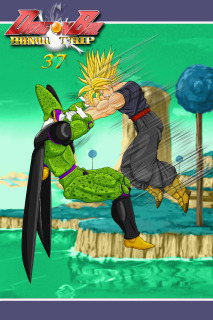 One of the illustrated covers for Honor Trip.
"A path of life, in all its glory, need not be predetermined."
Advertisement:

is a Fanfic written for Dragon Ball Z by American Vigor, edited by Genescritor, and with amazing art drawn by Ruga-Rell and colored by RyunoOhi

(a.k.a. Roketto). The story features an alternate reality scenario in which Cell gains the opportunity to overcome his malicious evil and pursues a path of redemption. He becomes one of the Earth's greatest heroes in this epic twist of Dragon Ball reality and ends up assisting the Z-Warriors following the events of the Cell Games.

Disclaimer: The Dragon Ball franchise is the property of Akira Toriyama, Toei Animation, Funimation, Fuji TV, and other entities that have created or broadcast or otherwise disseminated official content for the franchise.

The sophisticated writing style and frequent updates have made Honor Trip a tremendous success in the fanfiction community. Word of God has it that a spin-off Honor Trip revolving around Frieza may be in the works. As of June 2013, Savior of Demons is the spiritual successor to Honor Trip.