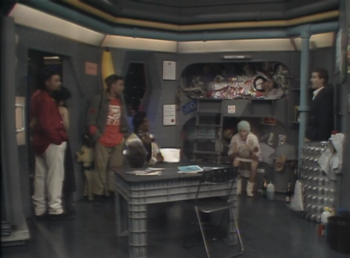 A guy walks into some sleeping quarters, and meets three Rimmers, three Listers, a Fake Shemp Kochanski, and a strange man with large teeth...
Advertisement:

Holly discovers a stasis leak in the lower decks of Red Dwarf, which opens into the men's showers three weeks before the radiation leak occurred.

At first, they think to try and bring someone back, but their first attempt to bring back a bar of soap has it turn into powder. Their next plan: convince someone to get into the second stasis pod and therefore, be safe from the radiation leak that kills the crew. Rimmer, naturally, wants to save himself. Lister is determined to save Kochanski—or, failing that, to remain in the past with her in spite of the pending disaster.