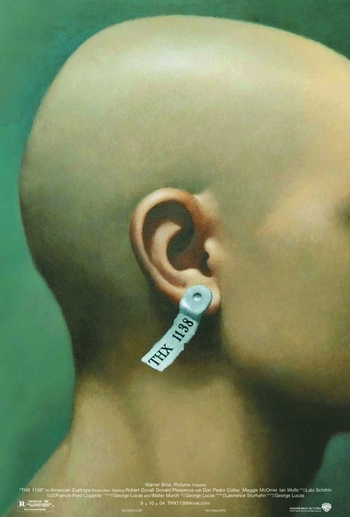 "The Future is here."
—Tagline
Advertisement:

THX 1138 (Robert Duvall) would be a happy worker drone, if the pills he takes would let him feel anything. He "lives" in a windowless industrial/commercial/dormitory along with other shaved-head people in a chemically induced haze until the day his roommate, LUH (Maggie McOmie), sabotages his daily dose of pills in order to make him feel. They both fall madly in love, but their bliss is short-lived since the pills gave THX a vaunted steady hand in his industrial job, and without it they may be discovered.

Which, sadly, they are. Once arrested, THX is sent to a strange White Void Room to receive "treatment" for his deviance. He recruits fellow inmates SRT (Don Pedro Colley) and SEN (Donald Pleasence) in an attempt to escape and rescue LUH. However, the escape won't be easy, and in their strange world, nothing is guaranteed.

This 1971 dystopian science fiction film was George Lucas' feature directorial debut, and started his rapid ascent in Hollywood. You may be more familiar with this film from the sound system company Lucas named in its honor, or from the fact that the number 1138 shows up everywhere in Star Wars and related products in reference to it. It is also a remake of his 1967 USC student film project, "Electronic Labyrinth THX 1138 4EB".