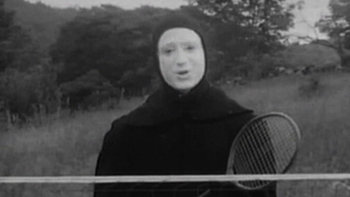 The Dove is a 1968 short film (14 minutes) directed by George Coe and Anthony Lover.

It is a parody of the films of Ingmar Bergman. Victor (Coe), an elderly professor, is being driven to his university to give a lecture. When he stops to take a poop in a roadside outhouse, he finds a wooden dove inside. The sight of the dove sends his memories back decades, to an eventful picnic by the lake with his extended family, including his sister Inga.