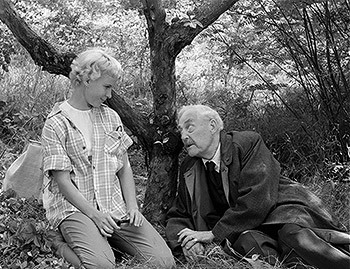 A 1957 psychological drama film written and directed by Ingmar Bergman.

Professor Isak Borg (Victor Sjöström) is a 78-year-old doctor, an eminent bacteriologist, who is about to receive a doctor jubilaris award for his 50th anniversary as a medical doctor. Isak is a grouchy old man, a widower for 30 years, who is not much liked by his son Evald (Gunnar Björnstrand), who owes a debt to Isak that he's having difficulty repaying, or his daughter-in-law Marianne (Ingrid Thulin). Evald and Marianne are separated and Marianne has been living with Isak for nearly a month.

Isak goes on the car ride from Stockholm to Lund in the company of Marianne. They stop at his childhood summer home, now overgrown with weeds, and Isak remembers his happy summers by the lake. He remembers his cousin Sara, whom he adored, but who was attracted to his brother Sigfrid (and eventually married Sigfrid). Moving on, Isak and Marianne pick up a trio of hitchhikers, two young men and a vivacious young woman named Sara (played by Bibi Andersson, who also played the first Sara). They also pick up a married couple, but the vicious fighting between the husband and wife leads Marianne to dump them by the side of the road.

Isak, Marianne, and the hitchhikers drive on. Isak dozes off in the car and has a dream in which he sees his long-dead wife, who evidently despised him, cheating on him. Back in the car, Marianne admits to Isak that she and Evald quarreled after she revealed to Evald that she is pregnant.

Wild Strawberries was inspired by an Ingmar Bergman "Eureka!" Moment in which he drove past his grandmother's house and wondered what it would be like to open a door that took one back into one's own childhood. It was the last film for Victor Sjöström, who had a career as an actor and director going back 40 years. For a brief time in the silent era Sjöström had been one of the leading directors in Hollywood, directing such films as He Who Gets Slapped, The Scarlet Letter (1926), and The Wind (1928).