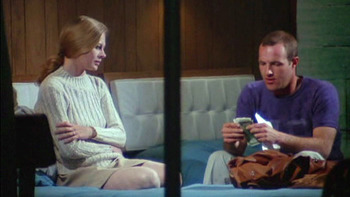 The Rain People is a 1969 drama film written and directed by Francis Ford Coppola.

Long Island housewife Natalie Ravenna (Shirley Knight) learns that she's pregnant. Feeling that she's not ready to accept the responsibilities of motherhood, she abruptly leaves her husband and their stifling marriage one morning to go on a road trip with no particular destination.

In West Virginia she picks up a hitchhiker, former college football player Jimmy "Killer" Kilgannon (James Caan). Natalie is attracted to the handsome Killer and charmed by his unassuming personality, until she realizes that his simplemindedness is the result of a brain injury he sustained while playing football. The pair travel all the way to Nebraska, where she abandons him. When she's pulled over and given a speeding ticket, Gordon (Robert Duvall), the officer who stopped her, finds her attractive and asks her out on a date. But it turns out Jimmy isn't out of her life after all.

This low-budget, slightly experimental film won some admirers when it was released but was largely ignored. But after Coppola's later fame it gained a cult following, reappraised as an early attempt to deal with feminist themes in film. It also marked the beginning of Coppola's friendship with George Lucas, who worked as an assistant on the film and directed (in one of his early credits) Filmmaker, a short making-of documentary showing behind-the-scenes footage as well as bits of Coppola's life (it also features a scene of Francis without his beard, if you can believe that).