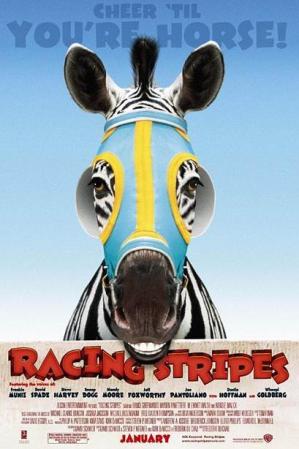 His stripes made him an outcast. His heart made him a hero.
A 2005 film combining live-action humans with FX-assisted talking animals (though like Babe and Charlotte's Web, the latter never talked to the former).
Advertisement:

A circus truck loses a baby zebra near the farm of a widowed former trainer Nolan Walsh (Bruce Greenwood) and his teenage daughter Channing (Hayden Panettierenote who, ironically was thrown from a zebra and badly hurt during production -she did complete the film but was forbidden to mention the accident while promoting the movie, in one of her several sports-related roles); the zebra, named Stripes (voiced by Hayden's brother Jansen as a baby, then by Frankie Muniz as an adult), grows up believing he's a horse and wants to race (hence the title). On his side are a Shetland pony named Tucker (voiced by Dustin Hoffman) who's helped groom many successful horses, sassy goat Franny (voiced by Whoopi Goldberg), a jumper Arabian mare named Sandy (voiced by Mandy Moore), hyperactive and dimwitted rooster Reggie (voiced by Jeff Foxworthy), a nervous big city pelican named Goose (voiced by Joe Pantoliano) and a pair of comic-relief flies Buzz and Scuzz (voiced by Steve Harvey and David Spade). Not on his side are most of the real horses, especially pompous, egotistical champion Sir Trenton (voiced by Fred Thompson) and his son Trenton's Pride (voiced by Joshua Jackson).

Meanwhile, Channing wants to follow in her late mother's footsteps and become a jockey, but her dad doesn't want her to do so as that was what killed her mother. The two underdog heroes must overcome adversity to triumph at the Kentucky Open.

Goose a Pelican, takes out Channing Walsh's motorbike, and the result is not pretty, as it results in the bike blowing up and Goose getting an Ash Face.

Example of:
Every Car Is a Pinto

Goose a Pelican, takes out Channing Walsh's motorbike, and the result is not pretty, as it results in the bike blowing up and Goose getting an Ash Face.