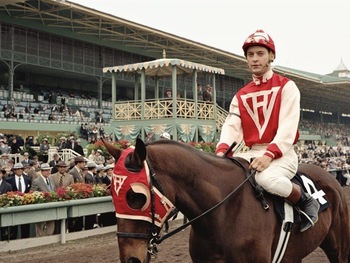 Seabiscuit is a 2003 American sports drama film about the racehorse of the same name. Written and directed by Gary Ross and based on Laura Hillenbrand's 1999 nonfiction book Seabiscuit: An American Legend, it charts the collision of four entities — three humans, one horse — in the creation of that legend.

During The Great Depression, John "Red" Pollard (Tobey Maguire), the child of a Canadian family, is left in the care of a race horse trainer. While learning the ropes of being a jockey, Red earns additional income in underground boxing matches, leading to a severe head injury during a fight that blinds him in one eye— potentially ending his jockeying career almost before it's begun.

Meanwhile, Charles Howard (Jeff Bridges), an office clerk for a bicycle company, is handed a new life by fate. After a happenstance involving a broken-down car, Howard finds automobiles fascinating, learning as much as he can about being a mechanic. Applying his new skills and no small amount of talent, Howard becomes an expert in cars in general, earning a living first modifying cars and then selling them, rapidly rising to be one of the largest and most successful car dealers in California. His charmed life is visited by fate again, however, when his son dies in a car accident. Howard is unable to cope, sinking into depression to the point that his wife leaves him and life as he knows it comes apart.

Since he can only obtain a divorce in Mexico, Howard travels across the border where he meets Marcela (Elizabeth Banks), whom he ultimately marries. Seeking a new focus for his life, he finds horses and, using his existing fortune, acquires a stable and horses, hiring itinerant horse trainer Tom Smith (Chris Cooper). Smith, in turn, convinces Howard to buy Seabiscuit, a troubled horse past trainers have labeled a lost cause but whose lineage suggests that, in the right hands, he could become something great.

Following a fight between Red and other stablehands, Smith hires Red as Seabiscuit's jockey, figuring their matching attitudes and tempers would complement one another. While there are some teething troubles, Smith is ultimately proven correct, and Seabiscuit quickly becomes a favored underdog for the millions suffering in the Depression.

Smith finally contrives a match race between Seabiscuit and War Admiral, the top race horse in the country, but Red breaks a leg during training and is told he will never be able to jockey again. Red recommends an old friend, George Woolf, as a replacement. With Red's coaching and insights in how to handle Seabiscuit, they defeat the favored War Admiral, but Seabiscuit suffers injury at Santa Anita some time later. Red helps Seabiscuit through his recovery and, using a brace he built for his own injured leg, Red rides Seabiscuit in the final race at Santa Anita against Woolf on another horse. When Red and Seabiscuit fall to the back of the pack, Woolf reins in his own horse to pull even with Seabiscuit, using the same technique he'd used in the War Admiral race to get Seabiscuit fired up enough to pull ahead and win his final race.

While there are separations between the film and the events that inspired it, the Broad Strokes of the film are generally accurate. Some modifications were made for the sake of drama or to create An Aesop, but the film is largely on point, particularly for a historical heartwarmer.