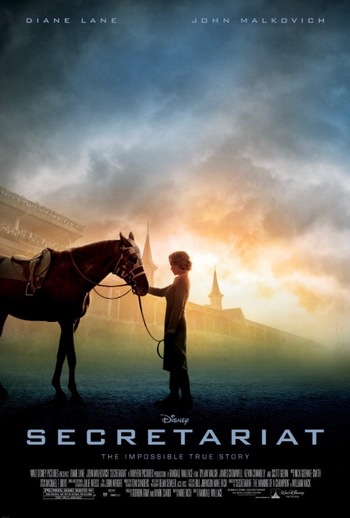 "In frenzied excitement he eats up the ground..."
Advertisement:

Secretariat is a 2010 Disney film about the eponymous chestnut racehorse (by Bold Ruler out of Somethingroyal), who rose out of the ashes of a fallen-from-grace racing stable to bring home the first Triple Crown trophy in twenty-five years with a thirty-one length victory in the 1973 Belmont Stakes and destroyed every relevant race and track record on the books as he did so.

The reason for this is one woman: his owner Penny Chenery, daughter of the aging, frail owner of Meadow Stables. Along with trainer Lucien Laurin, groom Eddie Sweat, and jockey Ron Turcotte, Chenery guided Secretariat through his two- and three-year-old seasons and produced arguably the greatest American racehorse to ever live.