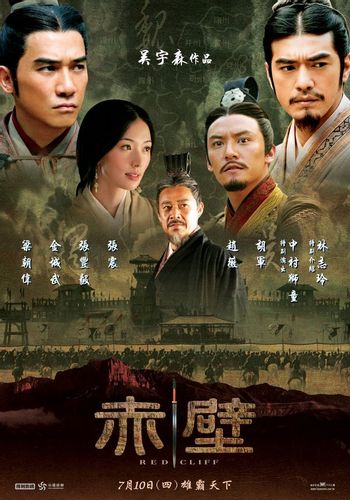 Red Cliff (original title 赤壁, Chi Bi) is a film directed by John Woo and inspired by a famous battle in Romance of the Three Kingdoms, based on the Three Kingdoms period of ancient China. The first part was released in 2008 and its second part in 2009; in some countries, only a condensed version was released. It stars Tony Leung Chiu-wai, Takeshi Kaneshiro, Zhang Fengyi, Chang Chen, Hu Jun, Lin Chiling and Zhao Wei.

In 208 CE, the centuries-old Han Dynasty is crumbling. To the South, warlords Sun Quan and Liu Bei have set up the independent kingdoms of Wu and Shu, respectively, while the scheming Prime Minister Cao Cao obtains from the young, naive Emperor leadership of a huge army to be sent to crush Sun and Liu's "rebellions". Cao Cao's Wei forces swiftly advance into the Kingdom of Shu and face Liu Bei's army at the Battle of Changban, where Liu's sworn brothers Zhang Fei and Guan Yu (who will later be deified as the Chinese God of War) successfully hold back the attackers, giving civilians enough time to evacuate. However, despite Zhao Yun's bravery, Liu's wife is killed by Wei soldiers, and only his infant son can be saved.

After the battle, Liu's master strategist Zhuge Liang is sent to the Kingdom of Wu to talk Sun Quan into an alliance against the Wei threat. Zhuge, who finds in Sun's general Zhou Yu a kindred spirit, convinces Sun to fight rather than surrender. The decision is taken to face Cao's army at the strategic stronghold of Red Cliff. During a first skirmish, Sun Quan's sister Sun Shangxiang's all-women cavalry force lures Cao's vanguard into a trap, and with the clever use of the Eight Trigrams Formation, Wu and Shu's forces defeats the enemy.

Cao's forces set up camp on the opposite riverbank to Red Cliff, and begins to plan for a large-scale naval attack. However, Shangxiang infiltrates the camp and provides Sun and Liu with valuable reconnaisance. An outbreak of typhoid fever weakens Wei forces, but Cao cunningly sends contaminated corpses to Red Cliff, resulting in Wu and Shu soldiers strickened with the deadly infection. Disheartened by the epidemic, Liu Bei pulls out of the alliance, although Zhuge stays behind out of personal loyalty to Zhou Yu. In order to remedy Wu's lack of arrows, Zhuge sends straw boats within range of Wei forces, and the latter unleash thousands of arrows into the boats.

Shangxiang returns from Cao's camp with a map of his army's formation. In order to buy time for a southeastern wind to be used as a fire attack in Wu's preemptive, Zhou's wife Xiao Qiao personally goes to Cao, knowing he has long since been infatuated with her, with the intent to distract him while Wu attacks. As the wind turns in the middle of the night, Wu send fireships to destroy Cao's navy, while Liu Bei, who had only faked defection, strikes Cao's camp from land. With the Battle of Red Cliff finished, Cao finds himself defeated and retreats to the North.

Not to be confused with Redwall.