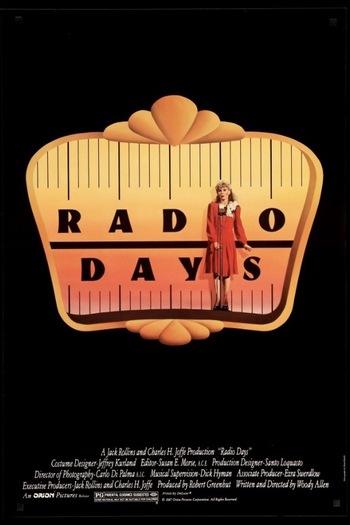 "I never forgot that New Year's Eve when Aunt Bea awakened me to watch 1944 come in. And I've never forgotten any of those people, or any of the voices we used to hear on the radio. Although the truth is, with the passing of each New Year's Eve, those voices do seem to grow dimmer and dimmer."
— Narrator
Advertisement:

Radio Days is a 1987 Woody Allen comedy-drama film about the golden age of radio in the 1940s.

The film focuses on young Joe (Seth Green) and his houseful of eccentric relatives in the New York City neighborhood of Rockaway, Queens. Joe's parents (Julie Kavner and Michael Tucker) are constantly at each other's throats in spite of their devotion to one another. Aunt Bea (Dianne Wiest) desperately wants to get married, but finds the pickings are slim during wartime. Aunt Ceil (Renée Lippin) and Uncle Abe (Josh Mostel) are always busy cleaning fish, thanks to Abe's connections at the fish market, while their daughter Ruthie (Joy Newman) spends all her time listening in on the neighbors' phone line.

As an adult Nostalgic Narrator (voiced by Allen), Joe relates memories from his childhood inspired by certain songs and sounds from the radio era. Woven in with stories about his own family, Joe also narrates several collected stories about famous radio stars of the time, including the story of Sally White (Mia Farrow), a ditzy cigarette girl from Brooklyn who became one of the most respected radio hosts through a series of mishaps and lucky breaks. The glamorous lives of the stars are contrasted with Joe's humble family, but as the adult Joe observes, the radio played an equally important role in all of their lives. And despite the times having changed drastically, the stories still live on through the music and the memories.

The film earned two Academy Award nominations, for Allen's screenplay and for its art direction and set design.