Film / Race with the Devil 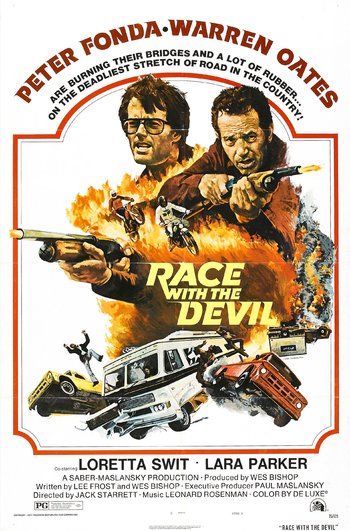 "They witnessed an unspeakable act... it may cost them their lives!"
Advertisement:

Race with the Devil is a 1975 action/horror/thriller film directed by Jack Starrett, starring Peter Fonda and Warren Oates.

Best buddies Roger Marsh (Fonda) and Frank Stewart (Oates), a pair of motorcycle mechanics and former dirt bike racers, set out on an RV trip from San Antonio to Aspen with their wives Kelly (Lara Parker) and Alice (Loretta Swit). Barely a day into the trip, however, they witness a Satanic cult sacrificing a young woman under the full moon. Now, the four are running for their lives as the cult chases them across Texas to silence them in a... race with the Devil!