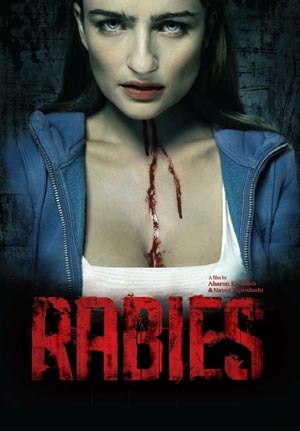 The film starts with a young woman, Tali (Liat Harlev), trapped in an underground room in the middle of the woods. Her brother, Ofer (Henry David), tries to calm her down and tells her it was probably a trap meant for hunting rabbits, and dissuades her from the idea that their father is punishing them for what they’ve been doing, asserting they’ve done nothing wrong. He goes out to look for the person responsible, but is soon heard screaming in pain.

Cut to the local park ranger, Menashe (Menashe Noy), listening to the report on the radio with his girlfriend and their German shepherd, Buba. He thinks it’s probably nothing, just rich kids’ antics, and chats with his girlfriend before going on his route with Buba.

Cut to a group of four young adults: Shir (Yael Grobglas), Adi (Ania Bukstein), Pini (Ofer Shechter), and Mike (Ran Danker), wandering through the woods, looking for their way to a tennis match, when they hit Ofer with their car. When he regains consciousness, he desperately asks for their help, taking Pini and Mike with him into the woods while Shir and Adi stay behind and call the cops. Unfortunately, one of the cops, Yuval (Danny Geva), is a shameless sexual assaulter, and the other, Dani (Lior Ashkenazi), is not as eager as he should be about stopping him.

Needless to say, it all goes downhill from there.

The film was an immense global success, appearing in over 50 festivals worldwide. At the Tribeca Film Festival it was selected as one of the top five films of the festival by the Los Angeles Times, Variety, the Wall Street Journal, and others. It won Best Film at the Ofir Awards, Best Feature Film at the Mile High Horror Film Festival in Denver, Colorado, Best Film at the Buenos Aires Rojo Sangre film festival, and other prizes and special mentions in other festivals.