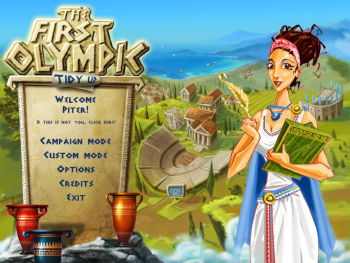 The First Olympic Tidy Up is a Puzzle Game by Tonuzaba Entertainment for computers running Windows released in 2008. The Olympics are about to be held in the honor of Zeus, but the organisers decide to get wasted and trash the place up, which infuriates Zeus, so he asks a party coordinator to clean up their mess.

The game's a variation of Spider Solitaire where you have to stack amphoras, with the higher-numbered ones going on top. Amphoras can be put on those of different colors if their numbers fit, but they can't be moved alongside the differently colored ones below. Getting rid of amphoras by completing all stacks finishes the level, after which you can buy power-ups that mostly serve the purpose of switching amphoras around.