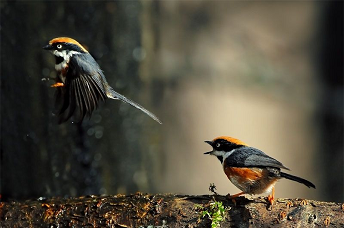 "MEOW!" note A real jump scare would be scary, so we put this. "MEOW!" might be scary if you happen to be a bird, but if you are, then what are you doing on TV Tropes, huh? Shouldn't you be off somewhere doing more important bird things? source

Building up suspense without boring the audience is not easy. Whatever is a director to do? Jump scares to the rescue! Everyone knows what a jump scare is: it's the horror technique of having something happen unexpectedly and suddenly (usually something popping up out of nowhere). It's frequently accompanied by an equally sudden loud noise to go with it, and often happens after a period of tension-building to ramp up the nerves of both the character(s) and audience and make the scare that much more effective for both.

The classic film example uses a loud brass horn or a woman's scream. Jump Scares follow the law of diminishing returns: they're effective when accompanied by a slow build-up of suspense, but using too many quickly turns them into a nuisance. Jump scares have been called lots of things: "cheap," "lazy," and "the lowest form of horror," because the jump caused by a sudden loud noise is a physiological reaction you can't control, even when you're expecting it. The film critic Nigel Floyd refers to the occurrence of this in films as "cattle prod cinema" — you're not being scared, just jolted. Not to say it can't be done right. When creators who do understand horror make use of the trope, they can do so to extremely good effect.

Cat Scare and Bat Scare are subtropes in which the scare itself is false but the jump effect is retained.

When used on its own in a Web Original, it can be known as a screamer or a prank. You know, the videos that encourage you to turn up the stereo and/or examine the picture closely. Related to Shock Site, where the startlement and horror arise from unexpectedly viewing a disturbing image. Contrast Sudden Soundtrack Stop, where the sudden lack of noise can be used for horror.

See also Chandler's Law. Not to be confused with Surprise Jump.