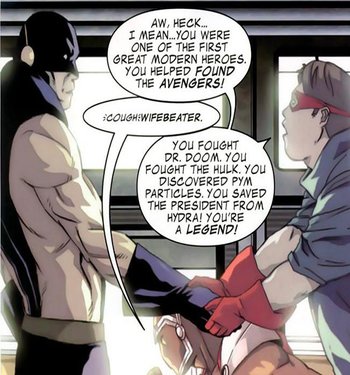 Now, by "cough-cough-getalife", do you mean "cough-getalife-cough"? Because [coughs twice] "get a life" isn't funny, but [cough] "Get a life" [cough]. Now that's funny.
— John Green, Brotherhood 2.0
Advertisement:

When someone needs some... uh... (coughHELPcough) help coming up with an, er... what's the word... (coughIDEAcough) an idea, someone else may be particularly unsubtle about giving the answer. Or an insult or snide comment is made, but is not intended to be heard by someone standing nearby (coughJACKASScough). It's also useful for calling attention to someone's (cough Blatant Lies Cough).

Hey, I heard that!

Anyway, other things that can be hidden between coughs or sneezes are names, as in, "I'm not going to name names but there's one person in this group who's a real pain coughALICEcough," or even entire sentences. Occasionally subverted by repeating the hidden words for clarification, implying that the insult was garbled by a genuine cough and the cougher really just has no respect for the person in question. This is sometimes followed by the other person saying, "Gesundheit."

Someone who is being especially snarky may just say "cough" instead of actually coughing.

Sometimes the cough doesn't hide any words, but indicates complete disbelief at what the cougher is hearing. Rarely, it may be a genuine, instinctive response to something the cougher finds truly egregious.

Rarely related to the Incurable Cough of Death.

Where are the Ladies?

Thor and Tony quickly explain why their love interests don't appear in Age of Ultron.

Where are the Ladies?

Thor and Tony quickly explain why their love interests don't appear in Age of Ultron.