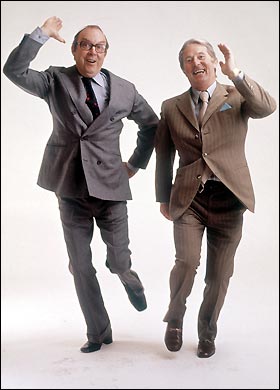 "Bring me sunshine, in your smile, bring me laughter, all the while..."

"The play what I wrote"
—Ernie Wise
"I'm playing all the right notes — but not necessarily in the right order."
—Eric Morecambe
Advertisement:

A legendary British comic double act, both of whom got OBEs. Consisted of Eric Morecambe (John Eric Bartholomew, 14 May 1926 – 28 May 1984), the dark-haired "funny man"; and Ernie Wise (Ernest Wiseman, 27 November 1925 – 21 March 1999), the blond-haired "straight man". They met as teenagers and learned their skills as a Vaudeville double-act during the 1940s and 50s, so by the time they got to be on TV, they were primed for success — but didn't get it. Their first TV show Running Wild (1954) suffered from what in hindsight was Early Installment Weirdness, and an early newspaper gag went "Definition of TV: the box in which they buried Morecambe & Wise". Morecambe, the more anxiety-ridden of the two, carried the cutting in his wallet for the rest of his life, as a sort of portable Motivational Lie.

The duo went back to live performance for seven years, before landing a second TV show on the British commercial network ATV, Two of a Kind (1961-1968). This was better-written and made them famous, including a memorable episode where they rubbed up against The Beatles, but there was more to come. In 1968 the writers of Two of a Kind, Dick Hills and Sid Green, quit the show and it was widely felt within British TV that Morecambe and Wise were finished. However, a BBC executive hooked them up with a gifted scriptwriter named Eddie Braben who understood them better than any previous writer, and The Morecambe & Wise Show (1968-1977) was the result.

Full of classic sketches and celebrity guests, and with the central dynamic between the duo brilliantly retooled by Braben, it made them more popular than ever before. A running gag was that Ernie considered himself a talented playwright and would ask the guests to take roles in the latest "play what I wrote". This allowed them to do spoofs of famous plays and films, playing Eric and/or Ernie's Large Ham tendencies for maximum funny. Christmas editions of the show earned the highest viewing figures in British TV history up to that point: 20 million people are estimated to have watched their 1977 Christmas special, making it in turn an integral part of A Very British Christmas. The story goes that the National Grid had to prepare in advance for almost everyone in Britain putting on the kettle at the same time after it finished. The show's success made the duo into national treasures.

The Morecambe & Wise Show had a Channel Hop to commercial TV in 1978, but Braben was left behind, and while the later version of the show contained many classic moments, the duo's final work was in general less brilliant than their 1970s peak.

Morecambe died in 1984, from a fatal heart attack after a public performance. Wise died in 1999. Both of their deaths were front-page news.

What do you think of these tropes so far? Rubbish!