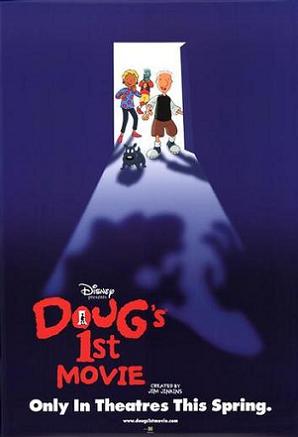 After searching various times in the series, Doug and Skeeter finally find the Lucky Duck Lake monster, who turns out to be nicer than they thought. They name him Herman Melville, and he becomes their friend. After showing him to Mrs. Dink, she tells them to keep Herman a secret, as well as the fact that Bill Bluff has been polluting the lake he came from. However, after Guy Graham, Doug's rival, finds a picture of Herman left behind by Doug when he was seeing Patti and Guy decorate for the Valentine's Day Dance at Funkytown, he quickly calls Mr. Bluff and tells him about the monster. Now, Mr. Bluff's army are searching for the monster, while Doug is trying to keep him a secret - all while trying to win Patti's affections from Guy.

Originally conceived as a Direct to Video release, Disney decided to release it theatrically to capitalize on the success of The Rugrats Movie. Because this decision was so last-minute, the film was only barely changed visually to appeal to a theatrical presentation. Critics bashed the movie for, appropriately enough, looking like an overdone direct-to-video movie and feeling like just like an extended version of an episode. And while it did recoup its small budget, it still didn't make a lot of moneynote A contributing factor could've been that Doug was on its last leg. The show was about to hit sixty-five episodes (the episode limit), the production staff was too busy with PB&J Otter, and Recess was quickly becoming the most popular show on One Saturday Morning. It also barely got any advertisement.. It ended up selling much better on video. Go figure.

This was also the last traditionally-animated American film to use painted cels before digital ink and paint became industry standard.