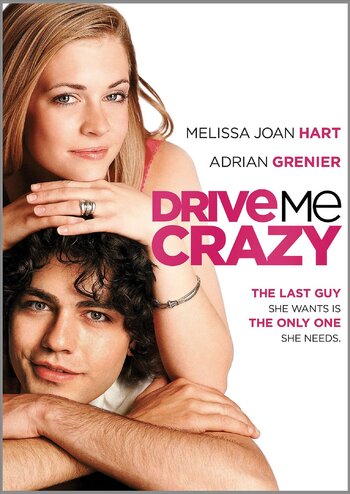 Drive Me Crazy is a high school romcom teen movie from 1999, answering to troperiffic traditions of the genre in The '90s. It is named after the Britney Spears song by the same name, which is featured in the film's soundtrack. Melissa Joan Hart as Nicole, a popular Extracurricular Enthusiast Genki Girl. She used to be friends with Chase, the Troubled, but Cute boy next door, portrayed by Adrian Grenier. She and her Alpha Bitch best friend Alicia are in with the in crowd and she is avidly planning the Centennial party for their school. The Cynic that she is, she plans on most-popular-guy ever, Jerk Jock Brad, to take her to that party, even though they are not dating and he has apparently fallen in love with a ditzy Pom-Pom Girl cheerleader. Afraid of the humiliation of going to snag her own in-universe crowning Moment of Awesome, she asks Chase to go with her. As Chase was recently dumped by his Soapbox Sadie girlfriend, Dulcie (Ali Larter), he obliges and crosses high school social dividers into Nicole's posse, going from Cool Loser to the new it guy, to the dismay of his friends.