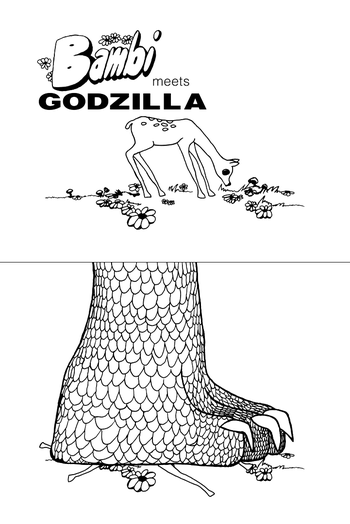 An extremely short cartoon from 1969, less than two minutes in length, written, animated, and directed by Marv Newland, with costumes and set-dressing by Marv Newland. Marv Newland was produced by Mr. and Mrs. Newland, and they are credited accordingly. All-told, the credits themselves take up approximately half of the animation's running time, which is ironic given that the only person that ever worked on the short was Marv Newland.
Advertisement:

So, what does the animation depict (besides credits)?

Well, it starts with Bambi (a deer) foraging peacefully as the opening credits roll and classical music (specifically, "Ranz Des Vaches", from Gioachino Rossini's William Tell) plays in the background.

And then Godzilla steps on him.

And the music turns into the Last Note Nightmare from The Beatles' "A Day in the Life" just as abruptly.

Notable for being the most inventive Credits Gag ever depicted (as mentioned above, every position is credited to Marv Newland), and for its brevity (total running time is 1:30, making it among the shortest works to have their own TV Tropes pages note The shortest is either The Remarkable Journey of Higgins von Higgings or Roundhay Garden Scene), Newland had intended to make a live-action film, but he lost the chance for an essential shot, and retreated to his room (interestingly enough, the room was rented from the same woman that provided Snow White's voice in Disney's iconic film) to create Bambi Meets Godzilla.

Several sequels (not by Newland) were produced, but failed to live up to the quality of the original.

You can watch the original here.

Not to be confused with David Mamet's book Bambi Vs. Godzilla.

Bambi is minding his own business grazing at the grass when the giant foot of a certain radioactive kaiju comes down on him.

Example of:
Giant Foot of Stomping

Bambi is minding his own business grazing at the grass when the giant foot of a certain radioactive kaiju comes down on him.