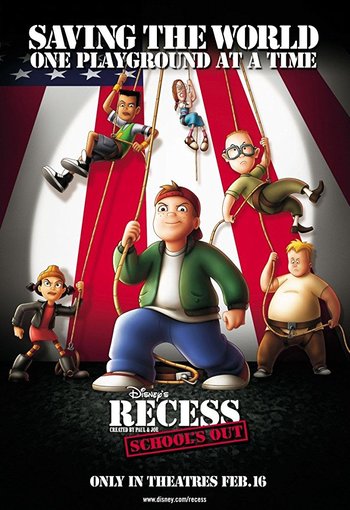 Don't mess with recess!.
T.J.: So that guy’s some weirdo ex-teacher who wants to get rid of recess?
Principal Prickly: Mm-hmm.
T.J.: Okay... Now it's personal.
Advertisement:

Recess: School's Out (or Recess: The Movie in certain countries) is a 2001 animated film of the popular Disney animated series Recess (released at the end of the fifth season), produced by Disneytoon Studios, written by Jonathan Greenberg and directed by Chuck Sheetz. It was the fourth movie based off a Disney television series to be released theatrically, the second (and most successful) movie based on a One Saturday Morning show, and the final One Saturday Morning based movie of the '90s lineup (Teacher's Pet would be the last movie from the block altogether, unless one show makes a revival of some sort). The movie began production in 1998 (during the show's second season, which pretty much explains how popular it was) and was finished in 2000.

It's the end of the school year, and T.J. Detweiler (Andrew Lawrence) is looking forward to spending summer with his friends Vince LaSalle (Rickey D'Shon Collins), Mikey Blumberg (Jason Davis), Gretchen Grundler (Ashley Johnson), Gus Griswald (Courtland Mead) and Ashley Spinelli (Pamela Adlon)...until he finds out each of them are going to different summer camps. Boredom and loneliness sets in for him until he notices something strange going on at the school. He makes his older sister, Becky (Melissa Joan Hart), pick up the rest of the gang from their camps (unwillingly), so they can aid him in finding out what's going on, as neither his parents nor the police believe him, and after getting Principal Peter Prickly (Dabney Coleman) to see what's going on, Prickly somehow gets zapped inside the building. The gang don't believe T.J. at first, and think he made the whole thing up to convince them to come home from camp, until they see a huge emitter dish come out of the school roof and shoot a laser beam into the sky. Two nights later, they plan a stakeout (with Randall (Ryan O'Donohue) snooping around and seeing what's up, and getting Miss Finster (April Winchell) to try and stop them).

They find out that former principal Phillium Benedict (James Woods) and his cronies are trying to enact a plan to end summer vacation for good by creating a permanent winter. After accidentally getting spotted (thanks to Mikey), the villains chase after the kids, including an army of ninjas. While the other five escape, T.J. is caught, and is put in the same room Prickly was captured in. Apparently, Prickly knows Benedict, who has wanted to get rid of recess since The '60s. Will the gang thwart the plans to get rid of recess and summer vacation?

The film did fairly well with critics (61% on Rotten Tomatoes, just enough to qualify as "Fresh"), and also was a solid performer at the box office, earning $36,706,141 domestically, and ended up with a total worldwide gross of $44,460,850 against a budget of only $10 million, and could be considered Disney's second biggest animated success for 2001 (With Monsters, Inc. in first), as their next animated film for the year wasn't as successful.

Followed by a sequel, Recess: Taking the Fifth Grade in 2003.

Not to be confused with School's Out! The Musical from a completely unrelated cartoon.

Recess: School's Out provides examples of:

Drop your silver in my tambourine
Help a poor man build a pretty dream
Give me pennies, I'll take anything
Now listen while I play
My green tambourine.
Feedback

TJ reports weird, mysterious happenings going on at 3rd Street School, only for the cops to laugh and outright mock him. Later TJ's friends and even Ms. Finster report to the cops about the weird happenings at the school, both with the same result.

Example of:
Police Are Useless

TJ reports weird, mysterious happenings going on at 3rd Street School, only for the cops to laugh and outright mock him. Later TJ's friends and even Ms. Finster report to the cops about the weird happenings at the school, both with the same result.