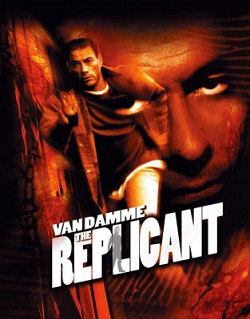 A Serial Killer known as The Torch (Van Damme) is killing off single mothers and their children by setting their houses on fire. The Torch's nemesis Detective Jake Riley (Rooker) comes out of early retirement to hunt him down as he’s assisted by a government-created replicant of The Torch.

Has nothing to do with the Replicants from Blade Runner.