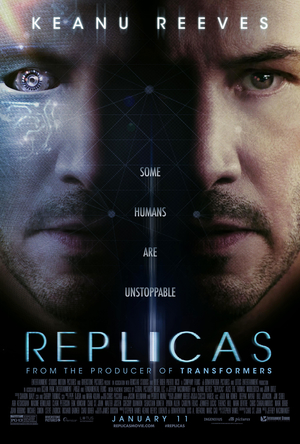 "What if something horrible goes wrong?"
"Something already has."
Advertisement:

Reeves plays William Foster, a neuroscientist experimenting in transferring human consciousness from one body to another. The film opens with Foster and his lab partner, Ed Whittle — Played by Thomas Middleditch — attempting to transfer the mind of a soldier who was recently killed in combat to a robotic body, effectively bringing him back to life. The experiment works on a technical level, but after only a few seconds of consciousness, the soldier panics and begins ripping his new mechanical body apart, forcing Foster to pull the plug on him and declare the experiment a failure.

The day after the experiment, William and his family take a vacation. En route to their destination, the family runs into an intense thunderstorm. Lightning strikes a tree, which causes a branch to break through the windshield and impale William's wife Mona — played by Alice Eve — and ultimately causes their van to swerve off the road into a lake. Foster's entire family is killed, save for William himself.

Desperate, William contacts Ed and begs him to retrieve equipment from their lab, so that he can clone new bodies for his family, finally succeed in his project in transferring human consciousness, and save his family.