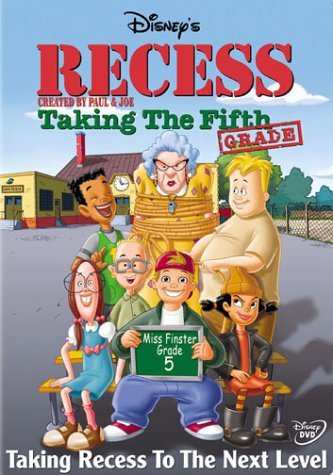 "Fact is, we've seen a whole lot of changes lately, and it all started over a month ago. It was the first day of school, and guess what? Me and the guys weren't fourth grades anymore. Finally, we moved on up to fifth grade."
— T.J.
Advertisement:

Recess: Taking the Fifth Grade is a 2003 Direct to Video Grand Finale to Recess(released two years after the show's final episode aired, and shortly after Disney Channel and Toon Disney picked up the series) and sequel to Recess: School's Out.

Like Beauty and the Beast: Belle's Magical World, Cinderella II: Dreams Come True, and Atlantis: Milo's Return, the film was a Compilation Movie composed of three segments. Unlike the other three films, however, this one was more well-received, as it was already based on a television series. Although similarly to the second Atlantis film, this movie was made up of rejected TV show episodes. After the initial sixty-five episodes, ABC wanted to order more (whether they wanted a seventh season or another series is unknown) due to the extremely high ratings. However, Disney declined, and put three of the episodes into this film.

The shorts feature T.J. and the gang adjusting to fifth grade, taking place a few months after the events of Recess: School's Out. The stories include:

The movie was simultaneously released with Recess: All Growed Down, which, despite consisting of three previous episodes, one new episode, and framing material, is still considered a "movie" by Disney.

Although the film received relatively positive reviews from critics, it's considered to be a bit obscure compared to the show and first movie, due to Recess not being as popular as it once was in the late '90s, and because of Disney's poor marketing of it compared to their other projects coming out around the same time. Among fans of the series, it has a mostly positive reception, though nowhere near the levels of the first film.

My voice. What happened to my voice?