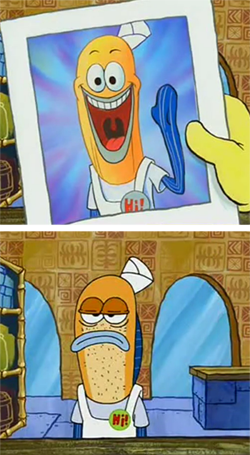 "Look at you, so young and happy! Where do the years go?"
"I became a teacher to make a difference. Now I just make them fall asleep."
— Miss Janeth, Trollhunters, "Bad Coffee"
Advertisement:

For many people, a job is normally just a paycheck to avoid being homeless, but many others dream of getting what they believe would be the best job ever, where they will love every second of it, and even get paid for enjoying it. Some are able to land this kind of job. But there can be a fine line between a dream come true... and a complete nightmare.

The Jaded Professional is someone who used to love their job, but after working some time there, they started resenting it, if not outright hating it. Maybe the system destroys the joy of the job, or maybe the character themselves hadn't thought about any of the downsides. One of the most common examples is politicians, where some people might want to make a change, but after a while, they learn that the system will block them at every turn until they stop trying.

This character tends to be an antagonist and/or mentor for the Naïve Newcomer, they may try to convince them that they should just give up. In the most idealistic works, the resolve of the protagonist will help them find joy in their job again.

Normally a deconstruction of Pursue the Dream Job. Sub-Trope of Jade-Colored Glasses and Super-Trope of Hates the Job, Loves the Limelight and Apathetic Teacher. Compare Trade Your Passion for Glory and Shell-Shocked Veteran.

Ja'far used to be such an idealistic kid before the job strangled his soul.

Ja'far used to be such an idealistic kid before the job strangled his soul.