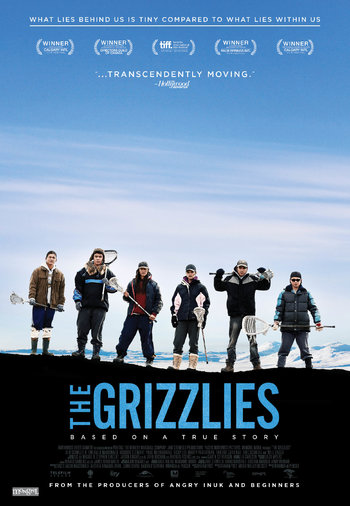 We are proud, strong, and full of hope. Instead of drinking, or fighting, or killing ourselves, we play.
"I told you, I don't run."
"There's a polar bear after you!"
"He can have me!"
Advertisement:

The Grizzlies is an 2018 Canadian sports drama film directed by Miranda De Pencier, depicting a youth lacrosse team that was set up to help combat an onslaught of youth suicide in the community of Kugluktuk, Nunavut.

In a small Arctic town struggling with the highest suicide rate in North America, a group of Inuit students' lives are transformed when they are introduced to the sport of lacrosse.

The film premiered at the 2018 Toronto International Film Festival.

Not to be confused with Grizzly or Grizzly Man.