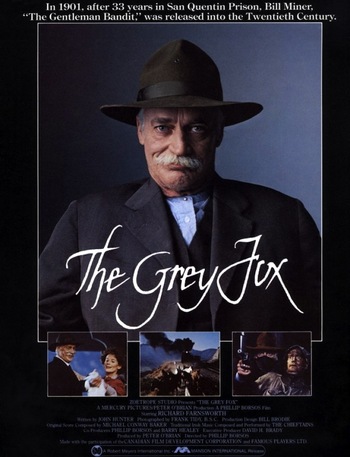 The Grey Fox is a 1982 Canadian biographical Western film directed by Philip Borsos and starring Richard Farnsworth, Jackie Burroughs, and Wayne Robson. It is based on the true story of Bill Miner, an American stagecoach robber who staged Canada's first train robbery on September 10, 1904.

After his release from prison in 1901, Miner (Farnsworth) wanders around, a man out of place in the new century, until he sees one of the first films, The Great Train Robbery, and is inspired to copy it in real life. After a couple unsuccessful attempts, he successfully robs a train and hides from the law in a mining town in British Columbia, becoming a respectable resident. There, he meets and falls in love with early feminist and photographer Katherine Flynn (Burroughs). He considers settling down with her, but one last robbery proves to be his downfall.

This film includes examples of the following: