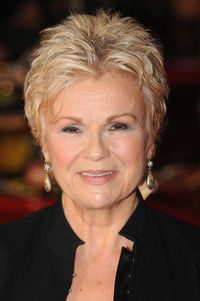 "I never wanted to become an actress because I'd read great literature or seen great Shakespeare. It was more just wanting to understand what the people were really like, why they said all the strange things they did."
Advertisement:

Dame Julia Mary Walters, DBE (born 22 February, 1950 in Birmingham, England) is an English actor and writer most famous for playing Molly Weasley in the Harry Potter film series. She is a Golden Globe, Emmy and Laurence Olivier Award winner as well as a recipient of two BAFTA Film Awards, four BAFTA TV Awards and in 2014, the BAFTA Fellowship.

Like many British actors, Walters has performed with the Royal Shakespeare Company.

She is also well known for her work with her longtime and very sadly missed friend Victoria Wood.

She played in the following films: