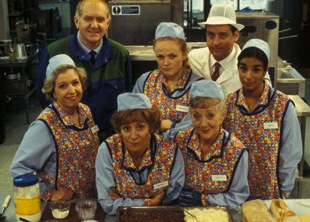 A two-series Work Com set in a Mancunian factory canteen. Written by, and indeed starring, Victoria Wood, and features a number of her regular collaborators.

The plot follows Brenda "Bren" Furlong (Wood) in an otherwise ordinary canteen job, flanked by four colleagues, the older best friends Dolly and Jean - one uptight and prudish, the other... less so, as well as the younger Twinkle (brassy, loud, ladetteish) and Anita (quiet, ditzy), all presided over by their boss, Tony, and supported by a cast of peripheral factory workers - HR manager Philippa, planning manager Jane and caretaker Stan. Oh, and Bren's Cloudcuckoolander mum, Petula.

The comedy predominantly comes from the interactions between the cast rather than wacky hijinks, Take Thats, visual gags or blatant vulgarity- to the point that, with the exception of two small scenes involving a hospital and a Game Show, the entire 16-episode production only used one set.

Despite the humour shown (which, being a Victoria Wood programme, can often take a turn for the slightly bizarre) most of the characters have darker moments to contend with both on-camera and in their backstories. This generally sees the programme described in listings as "Bittersweet".

dinnerladies contains examples of these tropes: