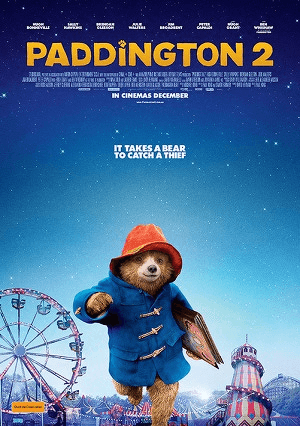 Paddington 2 is a 2017 film, and sequel to Paddington - based on the popular Paddington Bear books by Michael Bond.

As his Aunt Lucy's 100th birthday is coming up, Paddington searches for a gift that will show his appreciation of all the work she has done in raising him. In Mr Gruber's shop, he finds an antique pop-up book depicting various landmarks around London. As Aunt Lucy always wanted to visit the city, he decides he'll get it for her. As it costs around £500, he decides to get a job to buy it.

As he's ready to make the payment, Mr Gruber's shop is broken into and the book stolen. But Paddington is found at the scene of the crime, and is sentenced to ten years in prison! The Brown family, however, are determined to clear his name - and Paddington himself won't give up that easily.

Ben Whishaw and most of the cast from the first film return. Hugh Grant, Ben Miller, Brendan Gleeson and Joanna Lumley also star. A third Paddington film is set to shoot in 2022.

Paddington gets trapped in a train car sinking into a river. Mary dives after him but they both cannot get the locked train door to open.

Example of:
Trapped in a Sinking Car

Paddington gets trapped in a train car sinking into a river. Mary dives after him but they both cannot get the locked train door to open.