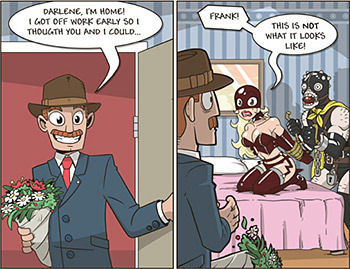 "Babe, babe, I can explain. You weren't supposed to be home."
— Robbie, 2 Broke Girls
Advertisement:

A character decides to do something mischievous or otherwise verboten under the assumption that they have the house for themselves. Rule of Drama ensures that the spouse or parent, who is believed to be away, will show up at the doorstep when it is least appropriate.

Perhaps they forgot something and returned to pick it up or they came back earlier than expected to surprise the character. Whatever the reason, expect a Bedroom Adultery Scene, Not What It Looks Like situation or a Wild Teen Party to ensue in front of their eyes.

Compare Rear Window Investigation which features the early return as a suspense element of the trope while the actual encounter is being averted.