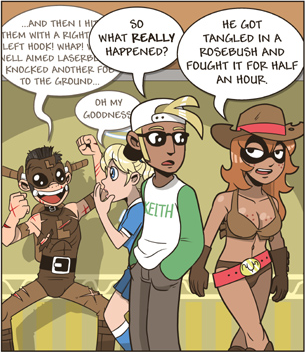 is a webcomic about a household of ineffective super-heroes (and Keith), who live in the city of Shitropolis (cough).

In their own words, "League of Super Redundant Heroes is a stupid comic made by even stupider people. Nonetheless, we hope you enjoy this web comic and return frequently as we update with new strips and try and progress from stupid to less stupid."

being a notable exception, though not the only one, and a few comics not showing any credit. In order of first appearance they are Mr. Dork, sir.Walrus/sirWalrus, mr.Sausage and SireHappyPantsnote sic

. All names capitalized and punctuated as shown. The comic started as a single story arc by all four artists, but fairly quickly evolved into each artist doing his own thing, though occasionally they'll team up for an arc.

, and Mr. Dork stuck around until this comic

in September 2016. Since then mr.Sausage has been maintaining the comic as a solo effort.

League of Super Redundant Heroes is combination gag-a-day comic with (mostly) short arcs, with the gags and individual arc pages interspersed. mr.Sausage favors arcs, where the others mostly did gag-a-day, so as of this writing new material is mostly arcs.