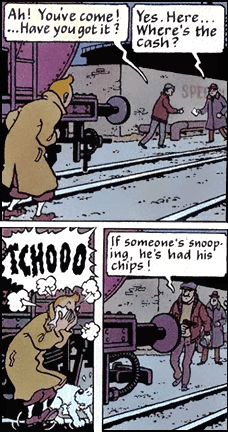 One of the worst possible times for a hay fever attack.
"Mom, I sneezed and blew my head off!"
— Calvin, Calvin and Hobbes
Advertisement:

The sneeze is one of the most disastrous and powerful forces in the universe, up there with gravitation, electro-magnetism, the strong and the weak nuclear forces, the color force, Love, Friendship, Music, and of course The Force. It always happens at the most unfortunate moments, usually when everything is going so well. Have you managed to sneak into the Big Bad's fortress and you're now listening as he explains his evil plan? Atchoo! All the guards are after you now. Have you created a very convincing Totem Pole Trench and fooled everyone? Atchoo! The Disaster Dominoes start toppling, and you're in a world of trouble now, matey.

The Sneeze of Doom rarely comes without warning — usually the unlucky sneezer will be shown inhaling air a few seconds before it happens. A Dead Horse Trope would be Anti-Sneeze Finger, which is holding one's finger under one's nose to "stop it." ...it might, for a few seconds. Still, it's not much help — once this starts, a Sneeze of Doom cannot be stopped by any means known to man.

And that's not counting the rare cases where a character, for whatever reason, has the kind of sneezes that should come with their own hurricane warnings.

Often caused by an allergy to the rarest substance known to man to which you will be exposed only at such a time, or something completely uncanny tickling your nostrils. And sometimes it comes with no reason at all—since people in real life sneeze at random moments all the time, the Sneeze of Doom can function as a universal Diabolus ex Machina.

See Pepper Sneeze and Hiccup Hijinks. Sometimes the sneeze is dangerous because of Involuntary Transformation or Malfunction Malady. Contrast "Aww"-choo for a very different sort of sneeze. Not related to Incurable Cough of Death.

May be connected to Plot Allergy. Very frequently results in So Much for Stealth.