No Such Thing as Wizard Jesus 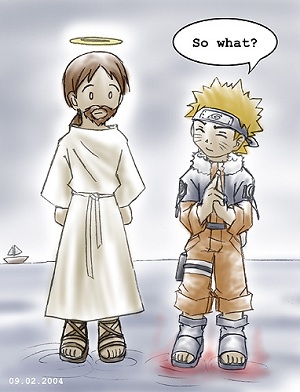 Pictured: What you're not allowed to point out. (Image

)
"I'm not impressed by superpowers. Whether 2,000 years ago or today."
— Ben Santini, Stormwatch
Advertisement:

Okay, so you have a setting where various people in the modern day have all these amazing powers. Whether they're born as mutants, mages, wizards, or something else, they're able to perform miraculous feats that warp reality itself.

Hrm, weren't there some other historical people who performed miraculous feats? People who ended up being worshipped? If you have these wizards running around turning lead into gold, who is to say that in this universe, Jesus wasn't just a cultist wizard conning people over by turning water into wine and restoring sight to the blind?

Nope, Jesus was never a wizard. This will never be brought up. You might get some talk about how, oh, the Greek Gods were really aliens or something, but if a character ever brings up a modern faith that people still practice widely — Christianity, Judaism, Buddhism, or Islam — nobody will ever go, "Say, these people we're fighting can resurrect themselves. I wonder if that means Jesus was..." While Beethoven may have been an alien spy, Jesus never was.

Often one of the things that comes up during Fridge Logic, especially if say, there's a Christmas Episode or chapter during which the main characters, who have every ability Jesus ever displayed and more, still celebrate Christmas as if it's a big deal, when Larry has walked on water, can produce food from rocks, and has already come back from the dead several times.

And despite the trope name, this refers to all religious figures and prophets, e.g. Krishna, Moses, and Mohammed. This trope is for when half of the reason you're part of a religion is because of records of miracles performed by gods, prophets, or messiahs — a world where everyone is running around with superpowers and constantly coming back from death should dilute that, or at least be addressed in some way.

There is a pretty good reason why this trope is so prevalent. If you try to subvert it, and say that Jesus was, in fact, a wizard/mutant/shaman/psychic/alien, people WILL be offended (and if you say anything bad about L. Ron, you might get sued). It doesn't matter how perfect and kind and wonderful you might portray him as, there will be always the implication that he was either delusional, or a charlatan, because he went on to found a religion that portrays him as the son of God in a Verse where abilities such as his are rather common. It's pretty hard to Hand Wave that away without making him or the church look bad. Rather than take a side, many works will walk the line with a "Maybe Miracle, Maybe Magic" answer.

It should also be noted that many religious figures used their powers not as justification, but as advertisement. "Yes, I just turned water into wine, but while I have your attention why don't you stay and listen to what you can do about your soul?" If the religions in the universe have decided to worship these figures for their teachings instead of supernatural claims or whatever powers or origins they might have had, that's fine. The problem is that it never plays out that way. It instead becomes a cosmic version of the Elephant in the Living Room.

See also: No Such Thing as Space Jesus. That one is about how any powerful being that claims to be a god in Science Fiction clearly isn't and anyone who treats it as such is a gullible fool, whereas this one is that religious figures still get treated the same even if their magic powers are nothing special in the setting.