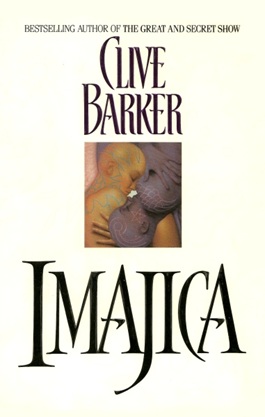 Written by Clive Barker, Imajica is the story of five dominions that make up the system of the Imajica. Earth is the fifth, separate and unlike the other four.

John Furie Zacharias, alias Gentle, is left empty and purposeless after his breakup with Judith, until a meeting with Pie, a shapeshifter who's neither man nor woman, that starts Gentle on a pilgrimage through the dominions to find out who he is.

Judith too begins craving to explore these new worlds. Soon, they are all drawn into a power-play between the mysterious Sartori, a cabal of mages who wish to keep the dominions secret, and a being who may very well be God.

Warning, this story contains psychology, drugs, lots of (strange) sex, gore, references to a lot of religions and feminism. But hey! It's Clive Barker.