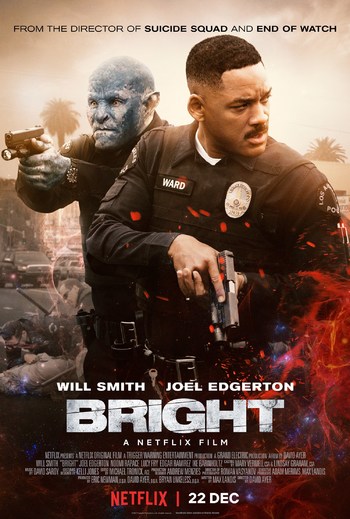 Jakoby: I think we might be in a prophecy.
Ward: We're not in a prophecy, all right? We're in a stolen Toyota Corolla.
Advertisement:

Bright is a 2017 crime/fantasy film directed by David Ayer and written by Max Landis. It stars Will Smith, Joel Edgerton, Noomi Rapace and Lucy Fry.

Set in an alternate present-day where humans, orcs, elves, and fairies have been co-existing since the beginning of time. Bright is a genre-bending action movie that follows two cops from very different backgrounds. Daryl Ward (Will Smith) and Nick Jakoby (Joel Edgerton), embark on a routine patrol night and encounter a darkness that will ultimately alter the future and their world as they know it.

Instead of a theatrical release, the film was released on Netflix in December of 2017. The trailer is here

Less than a month after its release, Netflix stated they were working on a sequel, but as of 2022 it is no longer in development. In 2021, it was announced that that Bright was getting an animated film spin off, Bright Samurai Soul. The film takes place in Japan during the end of the Shogunate and the beginning of the Meiji Restoration.