Film / Shadow in the Cloud 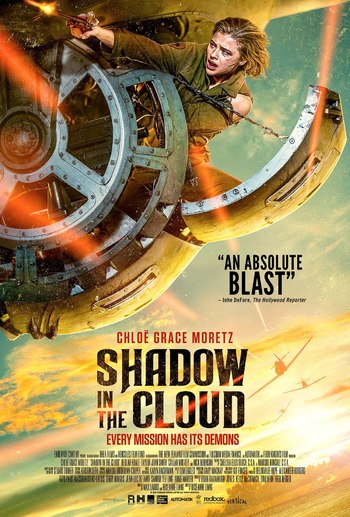 Every mission has its demons.
Advertisement:

Shadow in the Cloud is a 2021 American/New Zealand period horror action film, starring Chloë Grace Moretz, written and directed by Roseanne Liang from a treatment by Max Landis, and produced by the New Zealand Film Commission. It co-stars Nick Robinson and Callan Mulvey.

Maude Garrett (Moretz), a British Flight Officer stationed in New Zealand during WWII, is assigned to the B-17 Flying Fortress Fool's Errand at the last minute before it takes off on a long-range supply mission. Maude is carrying a classified box for delivery, and just needs the plane to carry her on its way. However the crew is skeptical about a woman being assigned such duties at all, and during the flight she begins to notice a strange creature crawling on the wing of the plane as mysterious malfunctions crop up.

When questions about her own mission begin to arise, she must deal with a hostile crew in addition to attacks by Japanese air forces and a literal gremlin trying to tear the plane apart around them.