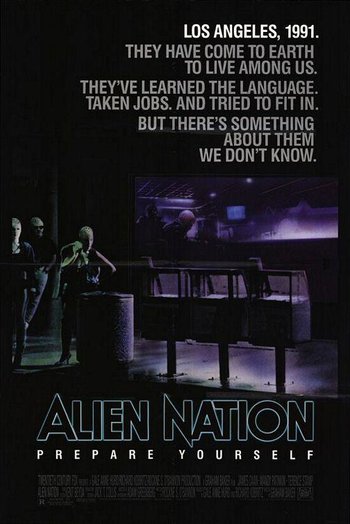 It's essentially a Buddy Cop movie with a Sitcom twist: the minority partner is a space alien, part of a race of "Newcomers" who ended up on Earth when the slave ship they were being transported on crash-landed. After Det. Matthew Sykes' (Caan) partner is killed in a shootout, he is partnered with Sam Francisco (Patinkin), the first Newcomer detective (whom he insists on calling "George"). While investigating the death of Sykes' partner, they uncover a dangerous Newcomer drug.

The film was adapted into the 1989 TV series Alien Nation, which lasted for one season and five TV movies. Also the film had a Comic-Book Adaptation and various Spin-Off made by Lowell Cunningham and Sandy Carruthers of Men in Black fame.

As of 2015, a planned reboot of the film has been announced

, but few details are known.

No, it's not related to the Alien saga, even if it is from 20th Century Fox.