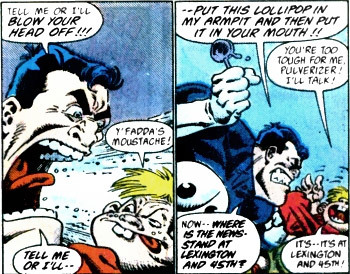 Standard response when someone is threatened with something. It tends to come off as a bit of an overreaction, since the speaker must know that there are far worse things that could happen, but might be justified if it is their worst fear and/or a Fate Worse than Death. Often played for comedy when the threat is relatively minor.

Classic reaction to when family or the Band of Brothers are threatened. For many heroes, someone they love being hurt because of them is literally the worst punishment they could possibly receive at the hands of a villain.

Sometimes the reaction to a Cool and Unusual Punishment and Suckiness Is Painful. See also Why Did It Have to Be Snakes?. Frequently paired with "We Have Ways of Making You Talk". See also I Take Offense to That Last One!.

When someone is faking this under the assumption the more they beg for "Anything but that," the more likely they will be given "that," it's Briar Patching. When they're forced into accepting the threat anyway for their own personal needs, see Too Desperate to Be Picky. See Would Rather Suffer for a similar trope for non-threatening choices.

Anything except The Stump!

After introducing himself, Lyle Munchak didn't want Mr. Desk to refer to him by his embarrassing nickname, "The Stump".

Anything except The Stump!

After introducing himself, Lyle Munchak didn't want Mr. Desk to refer to him by his embarrassing nickname, "The Stump".