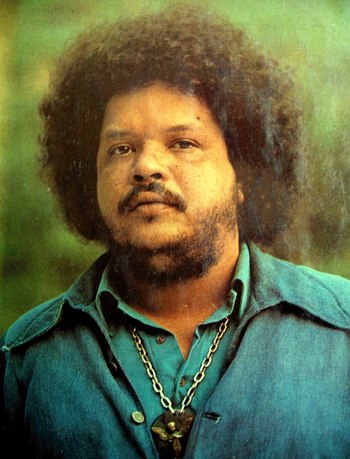 Sebastião Rodrigues "Tim" Maia (September 28, 1942 - March 15, 1998) was a Brazilian musician known for his jocular, yet soulful take on Brazilian music during his time. Maia was born in the Tijuca neighbourhood, in the northern suburbs of Rio de Janeiro. The second youngest of nineteen children, he wrote his earliest songs at age eight, at the time known as "Tião Maia". At fourteen, as a drummer, he formed the group Os Tijucanos do Ritmo, which lasted one year, during which he was also known by the nickname "Babulina", in reference to "Bop-A-Lena, a rockabilly by Ronnie Self. Interestingly, Jorge Ben Jor had the same nickname for the same reason. Tim was also very influenced by Little Richard (another influence cited by Jorge Ben Jor), Roberto Carlos said he learned to make the rock rhythm on the guitar when he saw Tim perform Richard's Long Tal Sally. In 1957, he founded the group The Sputniks, in which Roberto Carlos, Arlênio Silva, Edson Trindade and Wellington participated, where he played drums and sang, after falling out with Tim, Roberto Carlos left the group, being presented by Carlos Imperial as "The Brazilian Elvis Presley ", Tim sought Imperial and became" Brazilian Little Richard". He then took guitar classes and was soon teaching other children in Tijuca. Later, he taught Erasmo Carlos (at that time, only Erasmo Esteves) the first chords E, A and D, according to Erasmo, these chords allowed him to play several rock songs.

When he hit it big, Brazil was in the middle of a creatively vital period, the experimental music of Os Mutantes and the psychedelic samba fusions of Jorge Ben Jor were on the rise, but Maia's musical education came from an fairly short stint in New York (where he was then known as "Jim") that began in 1959, when he was 17, when he joined a vocal group named The Ideals (with Roger Bruno, the group's leader, he would write the song "New Love"). While in the U.S., Maia also began listening to Afro-American soul music, however, he was arrested in 1963 for smoking marijuana in a stolen car, he was deported back to Brazil.

Once he returned to Brazil, he had a few short jobs and arrests, before eventually decided to move to São Paulo to try to get help to kickstart his musical career from Roberto Carlos, who was beginning to enjoy the massive success of Jovem Guarda, presented with Erasmo and Wanderléa (basically, Brazilian MTV prior to their current trend of reality television) with Erasmo Carlos and Jorge Ben, all of which were old friends from Maia's childhood. Although, Carlos wouldn't let him perform on Jovem Guarda yet, Maia still performed in São Paulo's nightclubs and by the end of 1967, Maia managed to send a demo recording to Carlos, who got Maia a deal for a single at CBS and an appearance on the Jovem Guarda. And eventually recorded his first full-length LP, Tim Maia in 1974, which lauded hits such as "Azul da Cor do Mar", "Primavera", and "Eu Amo Você". In the following three years under the Polydor records label, he would release three more records (all self-titled) to increasing amounts of popularity, all of which containing much lauded hits of his career such as "Não Quero Dinheiro (Só Quero Amar)", "Você", "Where Is My Other Half?", "These Are the Songs" and "Gostava Tanto de Você".

In 1974, Maia was preparing his debut at RCA, after leaving Polydor once he received an offer from the former allowing him to record a double album (and generally being pissed at the way they handled his royalties). His band had already recorded several instrumental tracks before any lyrics were written, which led his lyrics to be inspired by a religious doctrine of a cult known as Cultura Racional (Rational Culture). Maia soon converted to the cult, abandoned the drugs and red meat, and decided to write the lyrics for the songs about the knowledge contained in the doctrine (known by the name Universo em Desencanto (Universe in Disenchantment)). RCA rejected the albums Racional Vols. 1 & 2 for the newly found spiritual content, but Maia bought the master tapes from them and released the albums independently through label Seroma (named for the first syllables of his first, middle and last names), an independent label founded for the purpose of releasing the records and splitting the profits with the cult.

Although alienating his audience and isolating his revues to just events promoted by Cultura Racional. The Racional Vols. are now considered to be his Magnum Opus and noted to be his only time when he was completely sober. Eventually in 1975, Maia got fed up with the cult, destroyed the unsold records and went back to his drugged out lifestyle and previous sound.

Over the next two decades, Maia would soon acquaint himself with burgeoning genres such as disco and would record cover records of bossa nova standards and even American pop songs. He would later die of a pulmonary edema caused by his history of drug consumption. After his death, he would become celebrated in Brazil as a central figure in the Black Rio movement

. And would later become lauded in other countries (particularly the U.S.) as a pioneer in psychedelia and soul music, with a retrospective collection being released by Luaka Bop titled Nobody Can Live Forever: The Existential Soul of Tim Maia.