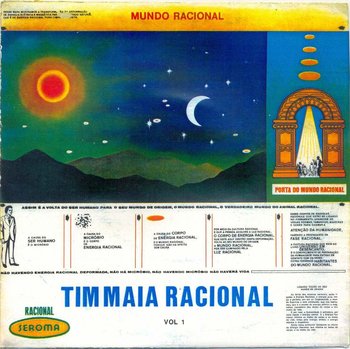 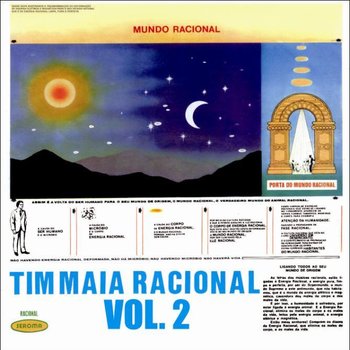 Vol. II
Que beleza é saber seu nome
Sua origem, seu passado
E seu futuro
Que beleza é conhecer
O desencanto
E ver tudo bem mais claro
No escuronote What a beauty it is to know your name / Its origin, its past / And your future / What beauty it is to know / Disenchantment / And see everything much clearer / In the dark
- "Imunização Racional (Qué Beleza)
Advertisement:

Tim Maia's Racional, Vols. 1 & 2, commonly known simply as the Racional Vols., are the fifth and sixth albums by Brazilian singer-songwriter Tim Maia. They were both released through his own independent record label, Seroma, in early 1975.

After the release of his previous album with Polydor, Tim received an irrefutable proposal from the label RCA to record a double album with complete artistic freedom; he would be able to choose not only repertoire, but musicians, studio and technicians. That combined with the fairly shoddy way Polydor handled his royalties from his previous record and he was re-signed to RCA little less than a month after his previous record was released in 1973.

In 1974, Tim started recording the bases of the songs in the studios of his new record company, in Rio de Janeiro. Some of the songs had lyrics already, but most of them were still just instrumental. Maia then started to visit friends who could write lyrics for the bases. On one of these visits, in late July 1974, Maia went to the home of his friend Tibério Gaspar and, as he was getting into the bath, went to the living room and took a book that was on top to read. When Gaspar got out of the bath, he found his friend enamoured with a book and Tim asked him which book was that. Tibério explained that his father attended the services of that sect that was called Cultura Racional (Rational Culture). Maia left with the book and, from that day on, the process of conversion to the doctrine began.

Maia soon converted to the cult, abandoned the drugs and red meat, and decided to write the lyrics for the songs about the knowledge contained in the book, known by the name Universo em Desencanto (Universe in Disenchantment). The record company, which was very excited about the material that was being produced, became concerned about Maia's religious turn and foresaw a fight when the record was ready. At the end of August, with the material already ready, Tim went to talk to the record company's executives. The contract provided that the singer from Rio would receive an advance to record a disc that would be purchased by the label for his national distribution. However, the label claimed that it had not been happy with the material and was not willing to buy it - in fact, executives feared the reaction of the Brazilian military dictatorship. To the record company's surprise, Maia simply took the tapes on which her double album was recorded and said she was going to press and distribute the LP himself by transforming his music publisher, Seroma, into a phonographic label.

The album was released in early 1975 by the newly christened record label Seroma, owned by Tim Maia himself. Instead of releasing a double album, as he intended, Maia decided to release two individual albums released in a relatively short timespan (Racional Vol. 2 was released within a month of Racional Vol. 1). A odd fact is that Maia did not make any distribution contract for the album, which was carried out in a amateurish manner, with few records left on consignment with stores that accepted and another part being sold during performances or even door to door by Tim and his band. Thus, the disclosure was hampered by the lack of national distribution, in addition to Maia's difficulty in selling presentations; the few he managed to make were either free or were only for members of the Racional sect. In addition, only one song from the album played on the radio, "Immunização Racional (Que Beleza)".

The album's critical response was more akin to radio silence and those who did come across it gave it negative reviews. This combined with his own personal falling out with the Racional sect, prompted Maia to attempt to erase these albums and this phase of his career from popular memory, destroying all the records that were still in his power, in addition to prohibiting re-releases and discouraged re-recording of the material by other interested artists. Despite this, the albums ended up developing a cult following, with the material being disputed by collectors and being worth good sums of money due to its rarity and quality. Thus, over time, despite Maia's own disenchantment with the records, became generally considered to be the best in his career with both records being listed in Rolling Stone Brasil's list of the 100 greatest Brazilian music records, at the 17th and 49th positions, respectively.

A archival record made up of spare songs for the records was released in 2011 named, Racional Vol. 3