Music / Peace Is The Mission 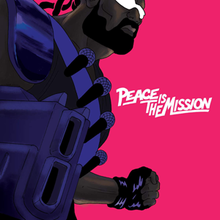 You need to know that I'm a rider...
Peace Is the Mission is the third studio album by Major Lazer, released June 1, 2015. This album sees them focusing less on reggae than their previous material, and incorporates elements of pop and Hip-Hop. That being said, there's still plenty to be found here. The album notably contains "Lean On", which proved to be the biggest hit in their careers. It topped many charts worldwide, and placed Top 5 in many others, becoming the biggest EDM crossover since Avicii's "Wake Me Up!" until The Chainsmokers' "Closer". Even more impressively, "Lean On" became the most streamed song on Spotify of all time (until Drake's "One Dance" surpassed it).
Advertisement:

Peace Is The Mission serves as the first part of a two-part album set. Its follow up Music Is the Weapon is set for release in 2016.

On November 26, Peace Is the Mission Extended was released, which features a remix and four new songs.