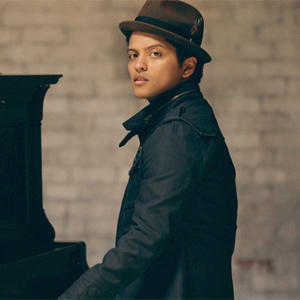 When I see your face
There's not a thing that I would change
'Cause you're amazing
Just the way you are
Advertisement:

Peter Gene Hernandez (born October 8, 1985), better known as Bruno Mars, is an American pop/R&B singer/songwriter noted for his throwbacks to various pop music genres. After bursting onto the scene with his song "Nothin' on You" (2010) with the rapper B.o.B and the song "Billionaire" (2010) with Gym Class Heroes frontman Travie McCoy, he rose in stature to one of the most popular artists of the 2010s.

He has won ten awards, and has been nominated for 65. His debut album has sold over two million copies and has been certified double-platinum in the USA. His song "Uptown Funk!", a collaboration with British DJ Mark Ronson, is one of the best-selling songs of all time. He also performed at the halftime shows of Super Bowl 48 and 50. He is a member of the production trio called The Smeezingtons, who have produced his own songs as well as for others.

On February 25, 2021, after a 4-year hiatus since his album 24K Magic, he and Anderson .Paak announced that they are forming a superduo

named Silk Sonic, and their first song, "Leave the Door Open", released on March 5, 2021. In a surprise, their first album, An Evening With Silk Sonic, which was originally scheduled for January 2022, came out on November 12, 2021 due to fan demand.

As Silk Sonic with Anderson .Paak:

These tropes are amazing/Just the way they are: