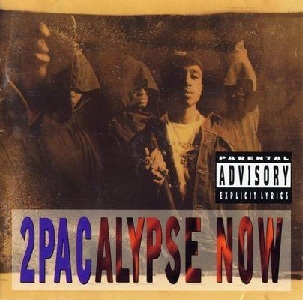 The one that started it all.
Tired of being trapped in this vicious cycle
If one more cop harasses me, I just might go psycho
And when I get 'em, I'll hit 'em with the bum rush
Only a lunatic would like to see his skull crushed
Yo, if you're smart, you'll really let me go, G
But keep me cooped up in this ghetto, and catch the Uzi
They got me trapped...

2Pacalypse Now is the debut album of Tupac Shakur, released on November 12th, 1991. A gritty Political Rap album, it finds 2Pac rapping about various social issues and injustices faced by the black community at the time, such as racism, excessive force and racial bias from the police, poverty, and teenage pregnancy.

While not as well-known and popular with the general listening public as 2Pac's later albums, 2Pacalypse Now is considered a classic by fans, and put his name on the map as a rapper with lyricism that may have occasionally been violent note The album faced some controversy when then-Vice President Dan Quayle called for it to be pulled from shelves after a youth in Texas shot a State Trooper and said he was influenced by 2Pac's anti-police brutality messages. 2Pac would get back at Quayle on his next album, but was overall very thoughtful and full of messages that needed to be heard. The album was certified Gold, and three of its tracks - "Trapped", "Brenda's Got a Baby", and "If My Homie Calls" - were released as singles.

"I Don't Give a Fuck" was featured on the Grand Theft Auto: San Andreas soundtrack.