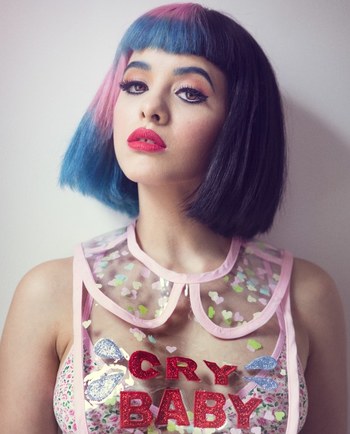 "I see things that nobody else sees."
"They call me cry baby, cry baby,
But I don't fucking care."
— "Cry Baby"
Advertisement:

Melanie Adele Martinez (born April 28, 1995 in New York City, New York) is a former contestant on The Voice and a current singer/songwriter specializing in disturbing electropop. Come spring of 2014, she announced that she had signed with Atlantic Records and would be touring soon.

Her popular single "Pity Party" was praised as "mixing the bright and bubbly with the dark and twisted", a review that turned out to be accurate to her debut album as a whole. Appropriately, another of her songs was featured in a promo for American Horror Story: Freak Show after she contacted FX herself.

Concept Albums Cry-Baby and K12 have their own pages.

"Hey, girl, open the walls, play with your tropes":